This post got a little delayed due to flooded basement related craziness, but here it is.  I’ll be putting up 4 posts with different contests within them.  Enter as many as you’d like, but make sure that you are logged into Google/Blogger/Gmail when you make a reply.  There will be 6 prizes available in this contest.  Each of the four winners will submit a first and second choice for their prize selection from the prize pool.  If you are the only person to select one of the prizes as your first choice then it’s yours.  If you miss out on your first choice then it goes to your second choice.  If someone happened to miss out on their first and second choices they can pick from what’s remaining.  The prizes? 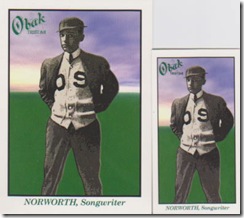 For Obak fans, a pair of numbered minis:

Jack Norworth wrote “Take Me Out to the Ball Game.”  The regular-sized card is numbered 16/25 and the mini is numbered 14/25. 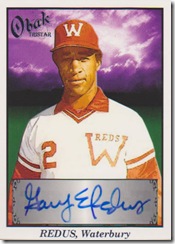 Also from Obak, we’ve got a Gary Redus autograph numbered 008/200.  Redus hit .462 at Billings in 1978 which is the highest average for a season in MiLB history. 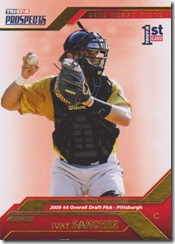 For my TRISTAR sponsored box break, we’ve got the Tony Sanchez gold parallel of the red background variant.  This card is numbered 15/50.  Sanchez was the #4 overall draft pick by the Pittsburgh Pirates. 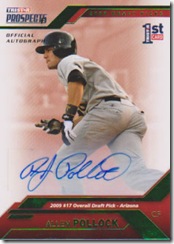 Next up is another card from the TRISTAR sponsored break.  This Allen Pollock autograph is the green parallel and it is numbered 23/25.  Pollock was the 17th overall draft pick and was selected by the Arizona Diamondbacks. 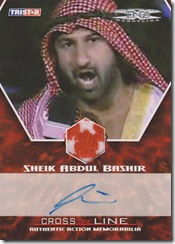 Next up are a couple of cards for wrestling fans.  The first is an autographed memorabilia card of Sheik Abdul Bashir.  It contains piece of an Agal worn in a TNA Event, Hard Justice to be exact.  This card is numbered 73/99. 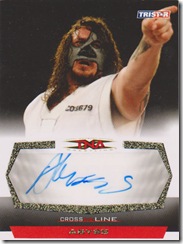 The final card is another wrestling card.  This Abyss autograph is numbered 02/50.  Abyss is currently getting a huge push in TNA and tag teamed with Hulk Hogan against Ric Flair and AJ Styles.  Abyss will face Styles at the next Pay Per View for a shot at the TNA Championship.


There you go, good luck everyone!  These contests will remain open until Midnight PST next Saturday the 20th.  I’ll announce the winners on Sunday.

Email ThisBlogThis!Share to TwitterShare to FacebookShare to Pinterest
Labels: contest

I will be waiting for further announcements.