A friend of mine made a trip out to California and while he was out there made his way to a Giants game.  Upon entering the park, he was given a pack of these trading cards.  I had no clue what the cards were at first, but as I did more research, I found out that they were pretty cool.

You can find out all of the details here on the Levi's Workshops blog. What stood out for me was the lack of statistics on the back of these cards.  Instead of stars, you’ll find out what the player’s favorite charity is.  Also, the cards were produced by Shepard Fairey’s Studio Number One.  Fairey started getting popular while attending the Rhode Island School of Design (RISD) and Boston was one of the first places that both the “Andre the Giant has a posse” and “Obey Giant” stickers started

popping up.  Fairey had his first art museum exhibition here in Boston at the Institute of Contemporary Art (and was arrested at the premiere for outstanding warrants related to graffiti.)  You can even find his Obey stickers in Punk Farm, a book by one of my favorite children’s authors,  Jarrett J. Krosoczka a fellow RISD graduate.  Krosoczka also used a slightly altered version of the image as promotional stickers for the book.

I’m getting off track here, but what I’m trying to say is that I’ve become a fan of Fairey and his art over the years.  Everyone now knows the iconic Obama poster that he created and I own a Hurley “Dude” t-shirt that copies that style. 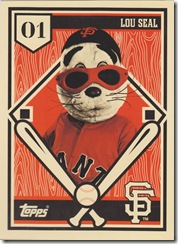 These cards give you a good idea of what can happen when talented designers work on cards.  These cards have a vintage feel without exactly copying a design from an old set.  I really wish that this design had been used for a mainstream set because it’s that good.

Not only is it a good looking set, but it is also a fun set.  I’ve always thought that mascot cards were fun and should be included in sets, but that’s rarely the case these days.  You might find them in kids sets, but that’s about it.  Here we’ve got a card of Lou Seal.  Before opening this pack, I had no clue that Lou Seal was the mascot of the San Francisco Giants which is exactly why we need more mascot cards 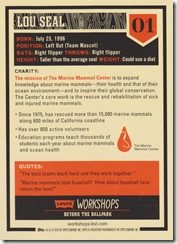 Now that you’ve all seen the card design, am I alone in thinking that these are great looking cards?  There’s nothing flashy, but they’re still great looking cards.  One interesting thing you’ll notice on these cards is that the player’s jersey number appears on both the front and the back.  The pictures are black and white, but that ties into the whole silk-screening workshop 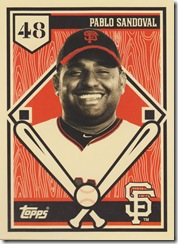 that these are promoting.  The only colors that you’ll find on these cards are red and various shades of black.

Lou Seal isn’t the only animal that can be found in these packs, there are Pandas to be found as well.  While Sandoval hasn’t replicated his outstanding 2009 season, his 2010 campaign hasn’t been terrible and he’s young enough that he’s got plenty of time to bounce back.

This set doesn’t just contain current players though.  You can also find cards of a few of the all-time great Giants players. 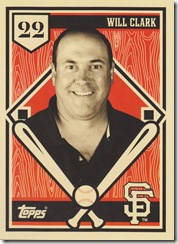 Will “The Thrill” is definitely one of the better cards in the set as is Willie McCovey.  Check out the rest of the set, including the Junior Giants cards, below. 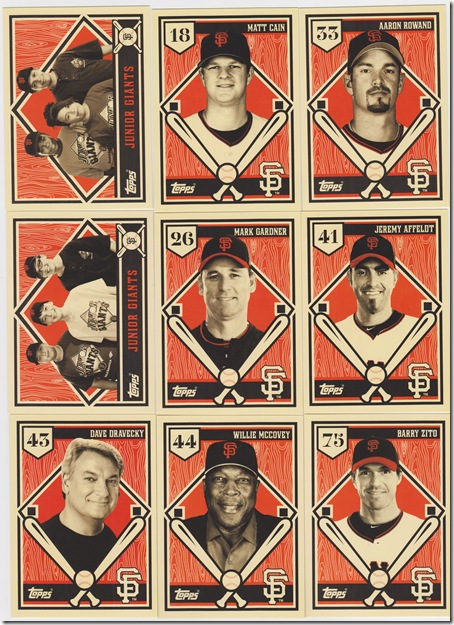